Happy Monday! Can you believe it’s Monday already? I sure can’t…

This weekend was strange. Brock and I initially had plans to visit Little Rock to see his family, some friends, and celebrate our 6 year (ahh!) anniversary together. Jack Frost had other plans…of course the time I don’t want bad weather, is when we get bad weather. I had to leave work a little early on Friday because it started snowing. It may have not been much but our town can barely handle any snow, and people flip out over a dusting. On my way home I already witnessed a few people driving too fast and skidding out of control.

We had dinner at home and watched the news. The weather man said we would receive the heaviest snowfall later the next day, maybe a dusting to an inch overnight. We both breathed sighs of relief, laughed and poured another drink.

The next morning we must have had at least 3 inches. We went ahead and packed up the Subaru and all 3 of us (Basquiat!) loaded into the car. It was hairy in some spots, but the car handled the road well…..until we hit the highway. I was really scared- and I could tell Brock was too! There were multiple accidents, and a car lost control and spinned in circles. If we had been any closer we would have been hit. We begrudgingly made the decision to turn back home, which was also scary. We went ahead and made the best of it though! We played board games, made dinner together, and I fell asleep too early, per usual. Desmond (our 3 legged cat bro) was extra cuddly this weekend and would not leave either us alone.

Yesterday most of the snow melted off (of course…) and I decided to make chicken noodle soup to lift our spirits. Plus I gotta get in all the soup making I can because there’s something not right about making a crock pot full of piping hot soup in the middle of July. This recipe is super simple and the crock pot does all the heavy lifting. 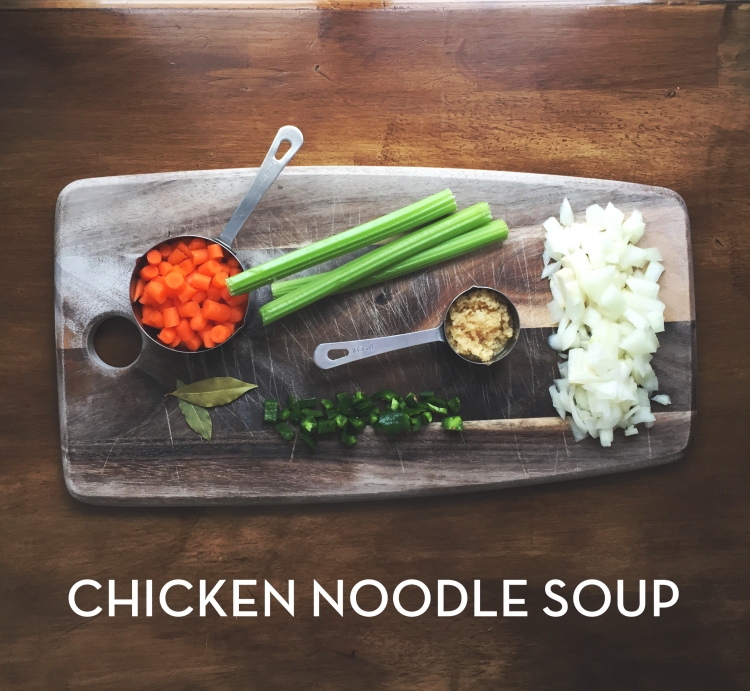 Get your ingredients together:

I totally forgot to take a good photo of the soup. Mostly because the lighting in the house was bad and I was hungry. Whoops!

7 thoughts on “SNOWED IN”

You may be going to San Fran, but I still have your Tupperware and I refuse to return it. I’ll miss your sassy attitude on our long runs together, our mutual love of champagne and intense political conversations, and more than anything, I’ll just miss you. #sexyiraglass #oldnavydan
My sleepy baby during The Castle of Cagliostro. #potatopuffcorgi #lifewithpotatopuff
2019 has been a doozy of a year. It’s been really hard and really fun. I trained and completed my first 100 miler ever, and it really ate up my most of my year. My running fam took care of me every step of the way and I will never be able to fully express how grateful I am. Brock has been amazing- to support your partner training for a hundred AND take care of a corgi puppy?! Insane. He’s the best damn husband of all time. My very best friend Claire got married- and it was SO beautiful! Brock and I traveled to the Netherlands and soaked up every moment (lol never forget cheese museum). Volunteered at my favorite local races and spent a lot of time with my favorite munchkin Adelaide. I could go on about all my favorite moments, and these aren’t even all of them. 2020- I’m ready for ya.
“You’re taking a picture of me, aren’t you?” Me: “...No.” 🤓

i run this blog solely for my enjoyment. i will absolutely make sure to credit all photos/links/etc where credit is due, and if i forget, please let me know and I will add it! all other designs/creative graphics/photos/illustrations that I create myself are for my personal use at jessandtonic.com, and please link/add credit if you'd like to repost it. I love connecting with others..so feel free to share away and contact me, whether it's a hello or question at jessandtonic (at) outlook (dot) com
%d bloggers like this: